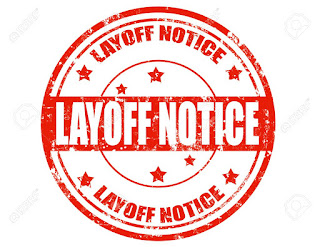 Back in 2013, both Hubby and myself were laid off from our respective jobs within a month of each other. We had some indication that it was coming, but not really any notice. This period of unemployment really put us in a bad financial spot, and made it difficult to rebuild not only our savings, but our trust in employers in general.

Many things have changed since then, and we have certainly gotten back on track, but our level of debt slowly climbed back up, and unfortunately, we hadn't had the opportunity to get it paid off as of yet. We both found work, and eventually life started to normalise in our new situation. We got comfortable with our new normal and went on about our lives.

Then I broke my leg/ankle.

The savings evaporated out of our accounts faster than we blink an eyelash, and my reduced income wasn't enough to keep us on top of the majority of our bills. As most of you know, if you read this blog, that I just started back to work at the beginning of this month, with very reduced hours so that I could build my physical stamina back up to where it once was, and I could ease myself back into the level of walking that I used to enjoy.

Then Hubby found out that he, along with almost all of his co-workers, were being permanently laid off at the end of September. A few days later, I was informed at my place of employment that our retailer is leaving and we are being laid off as of the 28th of this month. (My daughter works at the same place as I do, so that's two jobs being lost here.) Although Hubby was slated to be laid off on Sept. 29th, the company opted to do the layoffs on the 20th instead.

So all three incomes in our household are gone. Just like that. All in a matter of days of each other.

I'm angry, upset, worried, nervous and so much more. I'm not yet fully healed and probably won't be for a number of months yet to come. I could barely work the modified hours I was given, so re-applying for my position with the new owner is pretty much out of the question. Also, I don't think I can work outdoors anymore in the winter with the condition of my leg.

2016 has really not been very nice to my family, and I will be very glad to see it go.

We're heading into the last final days of summer holidays and the weather is starting to feel more and more like autumn. We are still having some very warm days, but the nights seem to be cooling down and the heat just isn't as oppressive as it was earlier in the month.

I started back to work this week, on modified hours of course. My first shift back was 3 hours. I experienced some pain and swelling, but mostly I was exhausted. I came home and slept for 3 hours after! I'm not really looking forward to the next shift which is a stunning 7 hours. I'm not so sure I can do that but I will do it anyway. I need to be working and bringing in money. The bills aren't going to pay themselves (although that would be awesome).

While our budget is tight, tight, tight, we have managed to have the rent paid prior to the due date for September and we have some wiggle room with some of the expenses. Gas and maintenance will be up a bit with two drivers again and two vehicles that require some repairs. The insurances have been combined but won't take effect for another month at least. Ultimately, this will save us at least $50 per month ; $25 in banking fees and about $25 in insurance costs. I also asked them to add on the Tenants insurance payment amount, so we shall see how it all comes out.

I am working on a plan for meals, especially dinner ( or supper, whatever you call it ).  I am planning when I am working, DD2 can come home after school, grab something from the freezer and dump it in the crockpot and start the cooking process. When I get home from work, I can get the 'sides' ready and we can have dinner on the table at an appropriate hour. If hubby is also working that day, he doesn't get home until almost 8 pm, so there will be a plate set aside keeping warm for him. This way, I will still have time to get Cub into the shower or bath, and have his evening routine go according to plan with minimal disruptions.

We have lots of cleaning and decluttering to do today, so I better get at it.
at 11:08 AM No comments:

Thoughts on Budgets and Other Things

Budgeting is something I do typically with pencil and paper in a notebook that I have had for years. Each month gets its own fresh page, and I list our expenses in order of importance (to me), top to bottom. On the side, I note when our direct deposits hit our account, and how much each one is. As the money hits the bank, I work my way down the list, either making a partial payment on bills (like rent) or paying the bill entirely using online banking. I've done it this way for years only because it is what works best for me. You may have your own method that is entirely different from mine that works best for you. That is what make personal finance, 'personal'.

We are already a little bit behind as some of the bills had not yet been fully paid for the month. Poor planning on my part, and a bit of a hiccup with a direct deposit not going in when it should have. If we hadn't already drained the EF over the last few months, I would have borrowed from it, and repaid a little extra with our regular deposits. So now I squeeze the current month budget a little tighter.

All of this has got me thinking about some things that I need to take care of.


Somewhere on the giant list of things to do I also have to add:

I am often overwhelmed when I try to picture everything at once, like I'm doing now. So with that said, I'll go knit a few rows to calm myself and pick one thing on the list to chip away at today. Have a good day.